God’s Renown:  The Local Church’s Journey to God and All Peoples 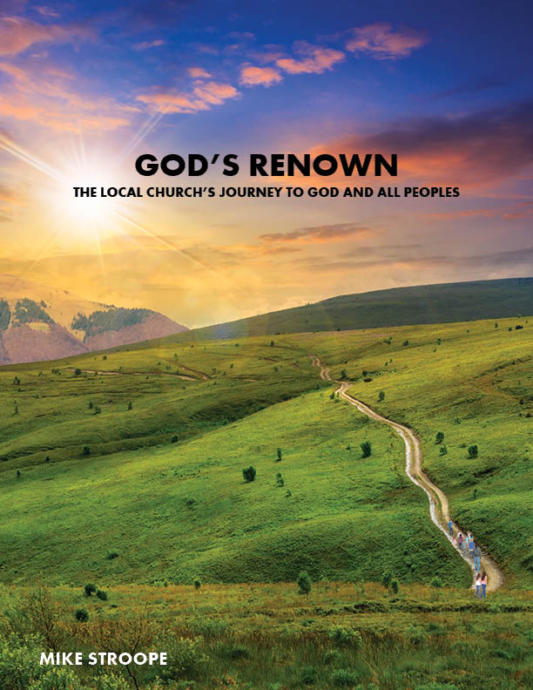 God’s Renown is an eight-week Bible study designed to lead readers into Scripture and guide them to a clearer vision of God and His purpose for all the peoples of the earth. Simply put, God’s creation exists to praise the Creator.

In the study, you will discover why God developed a special covenant relationship with Israel, and how at Pentecost, God’s covenant relationship broadened beyond a particular people to include people from all languages and cultures. These new covenant people were formed into the people of God by the blood of Jesus Christ — the Church.

Best described as the called and sent people of God, author Mike Stroope relays how the Church does not exist for itself but to demonstrate the renown of God. To this end, the Church has been called and sent to proclaim God’s glory and love to the ends of the earth.

God’s Renown is more than a book for knowledge about God or a workbook to complete. It is a pathway toward transformation of life. The hope is that through this study, you will encounter God and invigorate your perspective of the local church and the peoples of the world, that your understanding of God’s mission and your church’s role in it will grow.

The possibility of discovery and then action will definitely be enhanced if it is done with a Sunday School class, a home group, or a gathering of friends. To get the most from the journey, complete each section by yourself, and then meet with others to discuss your discoveries. 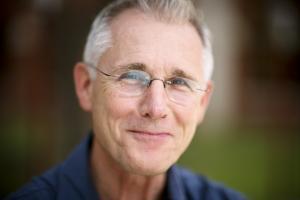 Dr. Michael W. Stroope is the Associate Professor of Christian Missions at Baylor University’s George W. Truett Theological Seminary. He joined the Truett faculty after 21 years of missionary experience. He also serves as the Missiological Guide for Restore Hope.

A battle rages. At issue is not land, property, or a particular form of government. What is contested is the reign of God among all the peoples of the earth. You and I exist for this battle. We exist for God’s renown.

One day the earth will be full of God’s glory, and He will reign as King. His victory is certain, more certain than anything in this life.

Do we live as though a battle is being waged? Do we know where the battle is being fought? Are we certain of how and when the victory will come? Such questions are difficult, or even uncomfortable, because of militaristic language or the nature of warfare; yet, this conflict is a reality clearly stated in Scripture and evidenced in the world around us. To ignore or dismiss it is to neglect one of the obvious truths of Scripture and to miss one of the chief aims of our lives. The kingdom of God is arriving in mighty force. The question before us is: will we be party to the coming reign of God throughout the world?

Some say victory is a matter of believers making a more quantifiable effort, but if effort assures victory, how much is enough? Others insist that victory lies in the mobilization of resources. Our love for organization and means convinces us that if we could just marshal more people and money, the world could be taken, the task completed.

I am convinced victory is not to be found in more promotion, more resources, or more organization. The battle for God’s renown is being waged on a completely different plane, and thus, a solution of a different kind must be rediscovered. If we are to be part of the establishment of the reign of God, we must go to our base understanding and assess our basic assumptions about God, the church, and the world. I believe what we will find is that the battle is being waged at the point of spiritual purpose rather than with natural means. The battle takes place first and foremost in our minds and hearts. The kingdom of God must come in His people before any place else.

As the title suggests, this study is about God’s reign and renown and the place of the people of God in the widening of God’s glory. In order to rediscover the essential or spiritual purpose of God and His means, we must make the biblical understanding of God and the Church our starting and ending points. The window through which this understanding is discovered and firmly grasped is the Word of God.

The church at this time in history has more innate wealth and power than ever before. Its influence and power stretch around the globe, into governments and throughout societies. Its schools, hospitals, and orphanages are everywhere and are some of the finest anywhere. Yet, why has “this gospel of the kingdom” been marginally received by many peoples of the earth? Why are societies and cultures in crisis while the church remains unable to speak adequately to their needs? Could it be that the church is snared by the same crisis, captured by its culture rather than by its God and His kingdom purpose?

The crisis of our culture is its lack of God, its God-less-ness. Too often, the church simply reflects the values, methods, and mindset of the culture around it. It relies on money, programs, and formulas for promised success rather than on the power of God.

The power of God is present and accessible when a local congregation is awed by the reign of God. Awe prompts the realization that power is not in our adequacy, wealth, or strength. Awe means we yield dreams, agendas, and hearts to God and live in step with His agenda and heart.

A local church can only speak prophetically to its culture and the world when God strikes it with a vision of Himself that instills awe and reverence. A church will lack vitality and voice, not because it is poor or needy but because it has not seen God. Its sin is not necessarily its gluttony, pride, sensuality, or apathy but its godlessness. It will know vibrancy and relevance when it knows God. Its voice will sound clearly to its culture and to the nations when it has been struck speechless before God.

You and I participate in this battle as we humbly face God’s reality and radically yield ourselves to His purposes. Much of my motivation in writing this study has been the personal realization of the futility of my means and the discovery of God’s power. Together, these have produced my own defining moment, prompting a more measured obedience. I have rediscovered that it matters little what position, power, or privilege I have if I have not seen a vision of God and heard His voice. The sum total of my life will be measured by my submissiveness and obedience to God.

What follows is a journey through Scripture that could be a defining moment for you as well. My intent is that you hear primarily the voice of God through Scripture rather than the commentary or explanation of a man. The Spirit opens God’s truths to us and changes us as we open our lives to His Word. So, I encourage you to begin this journey with the intent to revere God, to discover the purpose for His Church, and to live for His glory. The extent to which you open your life to see and fear God will determine the impact of the words and images that follow.

Fix this point firmly in mind, whether you are a male or female, young or old, student, mother, father, pastor, engineer, cashier, teacher, cook, physician, janitor, musician, missionary, or businessman: you exist to know God in all His glory and to give witness to God’s reign and renown throughout the earth.

1 A GOD LIKE NONE OTHER
God reveals Himself as distinct and different from all other gods and desires that His creation acknowledge Him as an absolute and awesome Creator. There is none like Him. He alone is God.

2 CREATION: ALL PEOPLES FOR HIS GLORY
God desires to be known and glorified by His creation as the Creator. Praise and worship—through the diversity of language, culture, and ethnicities of the earth—honor Him as the Creator God.

3 COVENANT: A PEOPLE FOR HIS GLORY
God established a covenant with a particular people and thus initiated a means whereby all the peoples of the earth would know and worship Him. The covenant began with Abraham and was fulfilled in Jesus Christ.

4 CHRIST: THE EXPANSE OF GOD’S GLORY AND LOVE
Jesus Christ is the point from which we see the complete purpose of God. Jesus is the unqualified and unique demonstration of God’s glory and love among us and for the nations.

5 COMMISSION: THE PEOPLE OF GOD, CALLED AND SENT
The church does not exist for itself but for the renown of God. It has been called and sent under the command and power of Jesus Christ.

6 CELEBRATION: ALL PEOPLES WORSHIPPING GOD
All peoples worshipping God is the goal of creation and history. The chaos and confusion will one day cease, and worship will remain forever.

7 CONSUMED: THE CHURCH EMPOWERED FOR GOD’S GLORY
The Church’s impact on all the peoples of the earth is not automatic, nor does it happen simply because the Church exists. The Church is to be ignited, purified, and powered by the Spirit in order to fulfill God’s purpose.

8 A LIFE LIKE NONE OTHER
Our individual and corporate lives do not have significant impact outside of God and His purpose. God calls us to radical and immediate obedience.

Click HERE to read an excerpt from God’s Renown.

To order this book, please complete the form below. Questions? Contact our office at 817.276.6494, or email us at OrderRenown@restorehopetoday.org.